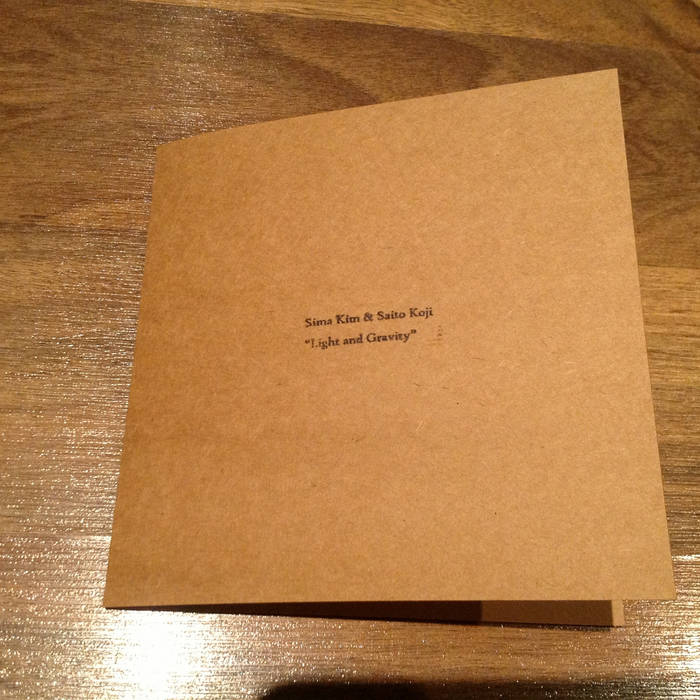 Michael LoCicero Another fine release on Gavin's Twice Removed Label. One Long Piece That is Atypical Sima Kim Work. Not Familiar with Saito Koji, however after listening to this piece I will also have to look into some of his stuff . Very Nice Piece...9+

Steve Smith The second collaboration between South Korean drone artist Sima Kim and Japanese keyboardist Saito Koji lives up to its title, somehow, evoking in its 48 continuous minutes a body suspended and circling slowly in a ray of sunlight, flecked with motes of dancing dust.

Be My Friend in Exile

Professionally replicated printed disc in a Kraft card sleeve that is handstamped and comes with a numbered, hand stamped library card insert. Comes in a card sleeve envelope tied with red string.

All music by Sima Kim and Saito Koji. Copyright owned by the artists.
Mastered by Craig Murphy.
simakim.tumblr.com
www.saitokoji.bandcamp.com

From Ambient Exotica:
Light And Gravity is the second collaboration of South Korean musicologist and Drone artist Sima Kim and Japanese keyboardist and sound creator Saito Koji after their luminescent-liquedous sunscape On The Sea (2013, Rural Colours). Now the duo presents a long-form piece of 48+ minutes which is released on Gavin Catling’s Perth-based Twice Removed Records and comes in an edition of 100 CD’s enclosed in a hand-stamped numbered kraft card sleeve with further information stamped on a library card which itself is inserted in an oversized envelope tied with red string. Mastered by Glasgow's ambienteer Solipsism aka Craig Murphy, the one-track album can be purchased and fully streamed at Bandcamp and is also available at selected stockists. Surprisingly, and I really mean it, the instruments which are used to let Light And Gravity become reality are yet again cleverly masked and hidden: an electric guitar is in there, but only music producers might possibly nod their heads to the unfolding anagnorisis. Much more transparently engraved are field recordings and tape effects. My review might therefore read like a detective work or texture-related interpretation, and in a way, this approach is very applicable. Since Sima Kim is a trained musicologist and Saito Koji a synth wizard, it is interesting to experience which textures or patterns resemble either light or gravity. Fans of the Cologne-based Kompakt label will be surprised, for Light And Gravity features tone sequences that are so utterly compatible in style to artists such as Ulf Lohmann or Triola that dedicated listeners will rejoice in regard to the euphoric euphony that is embroidered, injected and concentrated into the arrangement. My detective cap sits tightly, the magnifying glass appears before the inner eye, so in the following paragraphs, I dare a meticulous look at Sima Kim’s & Saito Koji’s aural aurum.

I am not entirely sure how dull or audacious the following, overly often used statement is for the respective reader, but I do know that it poignantly summarizes the stylistic luminescence of Sima Kim’s and Saito Koji’s whitewashed dreamscape: in the beginning, there was light. The cautious fade-in phase, while elementary and commonplace in multitudinous Ambient works, really bears a literally radiating meaning, for the initial seconds of this long-form piece are the only instance where some kind of distant darkness is perceptible, as the elasticized aerose flashes are comparably etiolated or emaciated in this initial stage. Even at this lower volume level, they function as a beguiling epithelium, forming a thin cell wall that becomes a guardian sentinel later on, but first has to be protected itself. As the voluminosity grows, it so happens that from this point onwards, everything is aglow, awash with light and emitting wonderfully heterodyned layer entanglements. These are so cleverly pieced together, so wadded and fluffed that there is no way to pinpoint the original instrument anymore. Since I am notoriously bad at detecting camouflaged instruments, I leave it that at and prefer to talk about synth-oid movements, sensing that I might have just described said electric guitar, unbeknownst to me.

The main aorta or leitmotif – better still: lightmotif – of Light And Gravity features a three-note amalgamation of crystalline mid-frequency globs whose ever-omnipresent helical appearance runs as the golden thread through the complete composition. Almost congruently akin to said Ulf Lohmann’s debut Because Before (2001), this distantly bass flute-resembling tone sequence is purposefully transparent, easy to grasp and prolonged, letting light in as well as reflecting the exterior beams of the second layer, a legato drone flume of cherubic proportions which bolsters the already blissful downwards floating pad cascades via a wraithlike-elysian fluxion. To me, there is no doubt that these two layers – the three vesiculating notes and the alloy of benignancy – are the titular light, a vigorous veil of verdure, sylvan source of sybaritism, artifact of positively somnolent soothingness and ubiquitous instance of insouciance. Best of all: the incandescence feels gaseous and aqueous at the same time, a trait which the duo already achieved on their first collaboration On The Sea. This mixture is highly intriguing due to its exclusively embracing aura. Underworld's Karl Hyde once uttered "you bring light in" – and that seems light years away. This Far Eastern Drone illumination is a positively low-keyed counterpart.

Without overanalyzing the innermost logic of Light And Gravity, the question has to be asked: where does the gravity come into play? It could be embodied by two different sets of textures, one which I have so far neglected to mention despite its regular presence, and the other which appears for the first time around the fourty-minute mark. Since Saito Koji’s & Sima Kim’s composition seems to be in a permanent state of tramontane tranquility and coruscating carefreeness, it comes – literally! – down to this: pops, crackles and soft hisses gyrate around the beams of light. Deliberate inclusions of imperfection such as infinitesimal static noise fragments, overdriven ornaments and generated jejune jitters create a veil or moiré that either drapes the light or is grafted onto the erbaceous scenery. It is as if a filter is applied which dims the true proportions of the eponymous light and adds weight, depth and, unsurprisingly, gravity to the phantasmagoria. Alternatively, the aforementioned other texture may resemble gravity, the one that appears after 40 minutes in tandem with a tape hiss-accentuated field recording of pouring rain (or friendly frequency turmoils), for this timestamp marks a change in the static paradise by progressing forward. This very texture seems to augment, amplify and multiplex the light, as these synth-like beams become louder and feel more present than before. They feel weightier and could therefore hint at the gravitational force. Notwithstanding the power of light, the long piece closes with its reduction and calcined fadeout, making room for the previously luring, now fully opalescent field recording of rain which itself is wafts away for good.

Light And Gravity tests and detests the contemporary listener, and this is what I love about it. Similar long-form releases such as Thom Brennan’s saturated Satori (2002) or Celer’s sun-soaked bucolic Viewpoint (2013) even go one step farther and reach the time-related digital boundaries of the CD medium by presenting tracks of 72 minutes or more than 78 minutes respectively, without including histrionic revelations about their complexion or intrinsic pool of surfaces. Sima Kim & Saito Koji approach the topic in a similar fashion. They decide to worship the moment by repeating one particularly majestic solemnity… and then stretch it to reach the mark of approximately 40 minutes before a further progression takes place in the form of a scent of change. I regularly encounter strata or layer-based intertwinements which I would love to go on forever, or at least for a mood-related timespan deemed convenient by me. Turns out that Light And Gravity is this very tune. Sima Kim does not exaggerate when he states that he wants to transmute beauty in his music or collaborations via minimalism and simplicity. Of course minimalism means many things to even more people who have witnessed the purposely harsh and cold IDM works of the mid–90’s, but here this minimalism is not based on thinness or harsh soils, but the curative selection of the utmost fitting, harmonious ingredients. Both artists are able to cherry-pick the needed materials in a galaxy of possibilities. There is no avantgarde mannerism found in this piece, no Third Stream eclecticism, no labyrinthine tone ladders or sophisticated surface chaparrals. Light And Gravity is a dedication to those listeners who want to bathe in light for the oxymoronic little eternity, bound by gravity so that a potential out-of-body experience leads back to the place one belongs to. And this very place has just gotten a better one thanks to two people whose sharing of the same initials is only the beginning. And in the beginning, there was light.